After a lifetime career in modern dance, Maggie Kast received a Master of Theological Studies from Catholic Theological Union and began teaching, choreographing and performing liturgical dance. She received an M.F.A. in fiction from Vermont College in 2001 and has published fiction in The Sun, Carve Magazine, Kaleidoscope, Nimrod International, Paper Street and others. Her essays have appeared in America, Writer’s Chronicle, Image and others. A chapter of her book, published in ACM (Another Chicago Magazine), won a Literary Award from the Illinois Arts Council and a Pushcart nomination.

From dancing to writing – and everything in between!!  SDG Member Maggie Kast’s latest novel “A Free, Unsullied Land” is now available and she will be on the road at various readings, discussions and other events.   Join her at one or another of these!

See a review of the novel by Ann Starr here.

For an invitation to the Book Party write to Maggie at madgance@gmail.com. 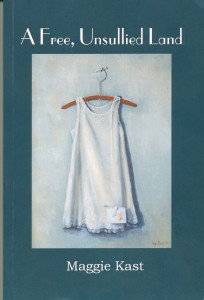