The SDG is joining the many others who are offering on line gatherings where we can be “Socially Present” while “Physically Distant“!   These sessions will be live from our living rooms, will be free, informal, intimate and open to approximately 30 people who want to connect in this way.

Tai chi is often described as “meditation in motion,” but it might well be called “medication in motion.” There is growing evidence that this mind-body practice, which originated in China as a martial art, has value in treating or preventing many health problems. And you can get started even if you aren’t in top shape or the best of health.  In this low-impact, slow-motion exercise, you go without pausing through a series of motions named for animal actions — for example, “white crane spreads its wings” — or martial arts moves, such as “box both ears.” As you move, you breathe deeply and naturally, focusing your attention — as in some kinds of meditation — on your bodily sensations. Tai chi differs from other types of exercise in several respects. The movements are usually circular and never forced, the muscles are relaxed rather than tensed, the joints are not fully extended or bent, and connective tissues are not stretched. Tai chi can be easily adapted for anyone, from the most fit to people confined to wheelchairs or recovering from surgery. Besides the benefits of better strength and balance, body awareness is enhanced, the mind becomes still and calm, and concentration/memory improves.  Moving in a slow, gentle manner while learning a specific set of steps becomes a meditative dance, and over time, increases the overall wellbeing.  Gloria’s workshop will include a brief introduction to Tai Chi (Universal Energy), the 3 Treasures Qi Gong (Energy Exercises) Cleansing Breath and Tapping as a way to stimulate the body’s pressure points to enhance blood circulation, followed by a brief warmup, before the practice of a series of 10-15 simple Tai Chi movements. 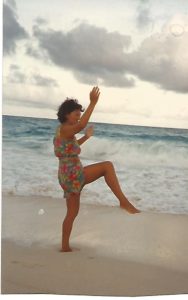 Gloria GOODINE (nee Whiting) was born in Shanghai, in the Peoples Republic of China and grew up in the British Crown Colony of Hong Kong (24 years).  She is of mixed heritage — Chinese and English (Eurasian) and encompasses the East/West traditions/values in her outlook on life.  While growing up in Hong Kong, she observed older people doing Tai Chi but decided it was too slow but something she might take up when she was old and frail — little did she know!!  Gloria has over 40 years’ experience in the fitness/wellness industry and has been fortunate to use this knowledge, teaching exercise while living and working in many parts of the world.  While in Washington, D.C., she certified with the YMCA/World Bank Health and Fitness Group as an aerobic dance instructor and taught regular classes at the World Bank.  She also joined the International Dance and Education Association (IDEA) to further her knowledge of dance.  Several years later, she re-discovered Tai Chi in Barbados and became a Tai Chi instructor in Ottawa.  Gloria enjoys all forms of movement — from aerobic dance, yoga, belly dancing, ballet and now sacred dance with the Sacred Dance Guild and her church, Parkdale United’s sacred movement group, Moving in the Spirit.  Before the pandemic, Gloria was teaching Tai Chi at Senior Retirement Residences for Aging Gracefully Ottawa, the Rideau Sports Centre, and IPG Wellness, and is currently teaching on-line.  She promotes the balanced life and encourages people of all ages to learn Tai Chi, and to practice on a regular basis.

The Sacred Dance Guild is blessed to have Gloria gifting her presence with us leading this Sacred Sunday session.  During this time when our lives have changed in ways we couldn’t have imagined, continuing our personal, collective and global mind/body/spirit connection is so important.  We are grateful for those who lead us on these journeys of discovery as we dance on waves of grace together.  We will be using ZOOM for Sunday’s sessions.