As all of us are exploring and expanding our connections during this personal, collective and worldwide experience we wanted to extend the conversation and reflection on the question “Is THIS Sacred Dance?” as far and wide as possible – both from a physical perspective but also from a philosophical perspective.  What does “fit” under this umbrella we call Sacred Dance?   We have realized that some people have an understanding when they hear that term it means something specifically “religious”, others think of a particular type of dance, such as Sacred Circle Dancing, and everything in between!    We decided to through open our screen doors and invite panelists from a wide range of backgrounds, experience and understandings to have a conversation and invite others to sit around the table with us.

This June 19th session is the 2nd in the series.  The first was held February 21st with the focus on Sacred Dance through Social Justice, Differing Abilities, Environment, Community and Ancestral Dreams.  In this 2nd panel we move to specific faith and spiritual expressions and explore them from the perspective of individuals who are part of the North American mosaic.

JOIN moderator Hiie Saumaa, from her home in Paris, France, with others from both the Sacred Dance Guild and the International Dance Council, along with our FIVE FASCINATING panelists for this 2nd session in the year long series of QUARTERLY CONVERSATIONS.  This session is “Live from our Living Rooms” and we invite you to join us around the table as we reflect on the question “Is THIS Sacred Dance?”  The session will be recorded and available for access following the panel.

To register send email to pres@sacreddanceguild.org with “Panel Conversation” in the subject line.

This session is limited to 100 participants so do register early! 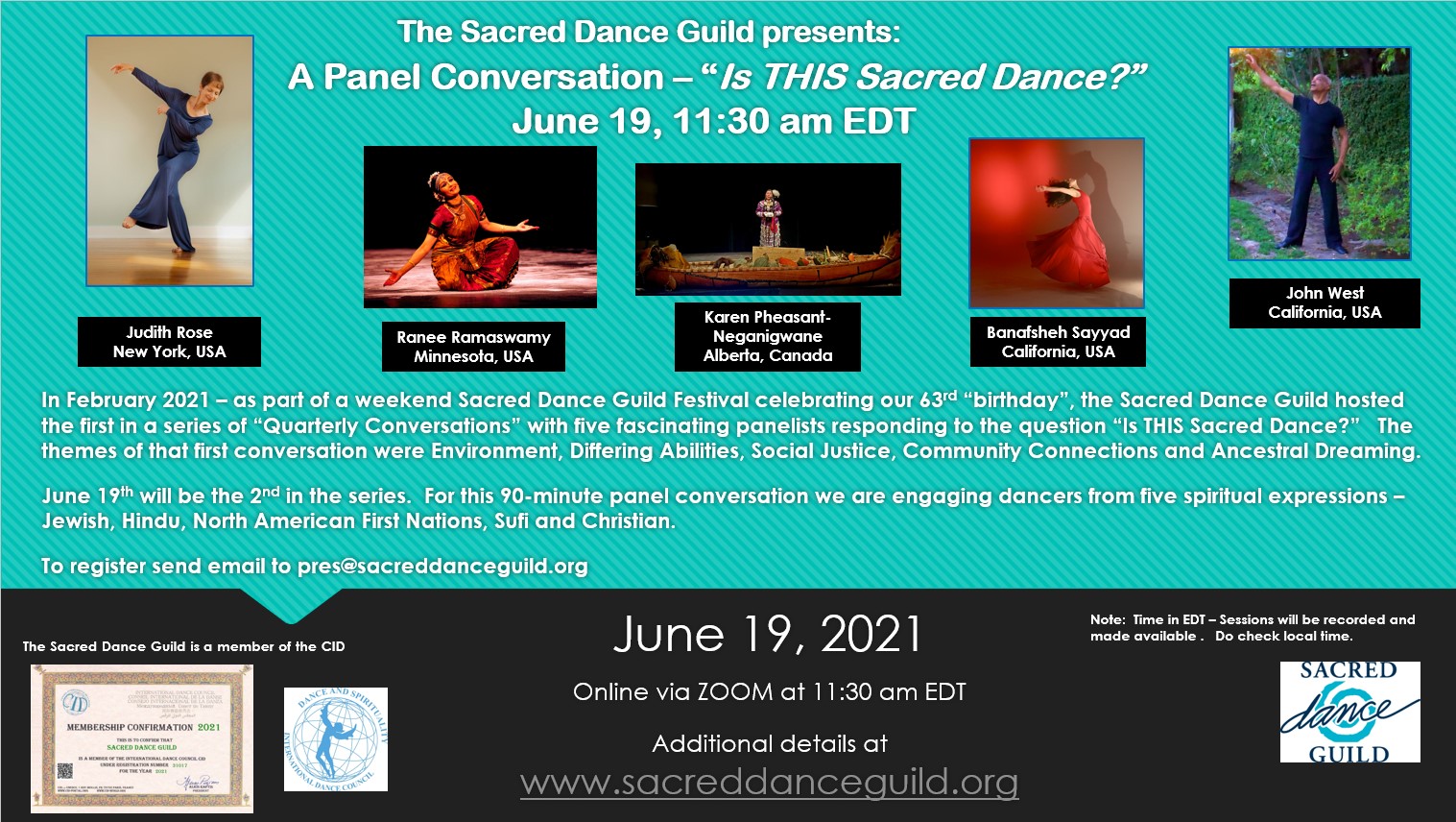 Our FIVE FASCINATING Panelists for the June 19th session are: 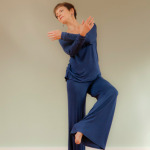 Jewish – Judith ROSE, Judith Rose, the founder of Vital MovementTM, is an experienced educator, choreographer, poet, and movement artist. She has extensive training in a variety of movement arts and therapeutic modalities from around the globe. Insights drawn from her rich background in Jungian Studies, Literature, and World Mysticism, are seamlessly integrated into her offerings.  Judith is a certified practitioner of Otiyot Hayyot, a Kabbalistic mindfulness practice developed by Dr. Yehudit Goldfarb. She studied and trained with David Leventhal, the director of the Mark Morris Dance for Parkinson’s Disease program, which has inspired her to create a unique eldercare program of movement.  Judith is known for her original workshops and choreographed movement journeys which have travelled to studios in many universities and dance centers. She, and her dance partner Igor S, have recently collaborated with filmmaker Lucas Ruderman to create “Wisteria”, a dance requiem to honor the lives of those who died during the COVID pandemic. Judith’s work is a passionate devotion that is deeply grounded in the belief that the arts, when woven through with spirit,  provide a medium for personal and communal healing and transformation. 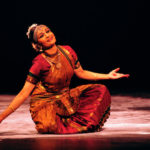 Hindu – Ranee Ramaswamy – Ranee RAMASWAMY has been a choreographer, performer, and teacher of Bharatanatyam, the classical dance of South India, in Minneapolis/St. Paul, Minnesota, since 1978. She founded Ragamala Dance Company in 1992 and currently serves as Co-Artistic Director, Choreographer, and Principal Dancer along with her creative partner (and daughter) Aparna Ramaswamy. As dancemakers and performers, their creative vision merges the rich traditions and deep philosophical roots of their Indian heritage with their hybridic perspective as first generation Indian- Americans.  Throughout her career, Ranee’s work has merged the classical language of Bharatanatyam with a contemporary Western aesthetic to create timeless pieces that freely move between the past and the present. Her training in Bharatanatyam under iconic dancer/choreographer Alarmél Valli in Chennai, India, is the bedrock of her creative aesthetic.  See https://www.raneeramaswamy.com/ 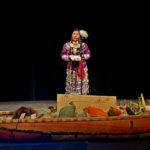 North American First Nations -Karen Karen Pheasant-Neganigwane – Karen is an Anishinaabe dancer, educator, writer, artist and orator from Wiikwemkoong on Manitoulin Island, Ontario. Her grandparents, maternal and paternal, come from Wiikwemkoong. Her parents are residential school survivors. Karen is a PhD candidate in Educational Policy Studies/Indigenous Peoples Education at the University of Alberta and is an Assistant Professor at Mount Royal University in the Treaty Seven region. She is cross-appointed to the Department of General Education, Office of Teaching and Learning, and the Department of Humanities–Indigenous Studies.  Karen published her first book in April 2020, Powwow: A Celebration through Song and Dance.  It in its second distribution and has been nominated for a 2021 Yellow Cedar Award by the Ontario Library Association (October 2020)  “Powwow is a celebration of Indigenous song and dance. It’s a journey through the history of powwow culture in North America, from its origins in colonization, the Indian Act and the Wild West shows of the late 1800s to the thriving powwow culture of today. As a lifelong competitive powwow dancer, Karen Pheasant-Neganigwane is a guide to the protocols, regalia, songs, dances and even food you can find at powwows from coast to coast, as well as the important role they play in Indigenous culture and reconciliation,” (Orca Book Publishers, 2020) 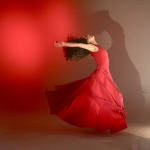 Sufi – Banafsheh Sayaad – Banafsheh Sayyad is a master Persian sacred dancer, choreographer, transformational teacher and founder of Dance of Oneness®. She is a deeply profound and highly accessible spiritual teacher of embodiment. Banafsheh performs and teaches internationally, initiating people into the wisdom of their bodies. She inspires all to live in these modern times grounded in love for the Earth and centered around our abiding true nature. Her signature style of holy wildness infused with ancient wisdom ignites transformation and illumination in all those who watch her and dance with her from around the globe. Banafsheh invites the dancer within to remember, reclaim and resource the innate healing intelligence streaming through us and spiraling all around us. Her easeful instruction and welcoming spirit empowers students from all stages of life to feel a true sense of belonging in their bodies and passion in their lives, by integrating wisdom teachings proven throughout the ages. She is among the few bearers of authentic Persian dance in the world, and a pioneer in creating a liberated feminine expression in the Sufi dance genre previously performed only by men. Her modality, Dance of Oneness® is dance as a spiritual path and science of embodiment. It is a fusion of the art of dance: rigorous technique and self-expression; healing; and wisdom teachings. Banafsheh has a Masters of Fine Arts in Dance and Choreography from UCLA and a Masters in Chinese Medicine. Her award-winning work has been presented in North America, Europe and Australia. Her dance film, In the Fire of Grace with Andrew Harvey traces Rumi’s journey of the soul in dance. She currently teaches courses online.  Visit www.banafsheh.org for more information.  “Banafsheh is one of the greatest sacred dancers I have seen.”  Deepak Chopra 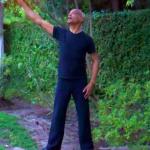 Christian – John West – John WEST is a trained practitioner of classical modern dance technique and choreography. As a child he studied dance at the Lester Horton School of Dance, and as a teen studied tap under Willie Covan; as a youth, he studied classical modern dance and choreography at the Los Angeles University of Judaism under the instruction of Saida Gerrard and became a member of her dance company. After receiving his Bachelor’s degree in Psychology with a minor in Dance and Theatre, Mr. West earned a M.Ed. from Loyola-Marymount University and a M.A. degree in Folklore and Mythology from UCLA with an emphasis in biblical literature and dance. “The Dance of Israel” as taught by Margolit Oved Marshall became his focus for the degree program.  John has been a dancer and choreographer in the field of sacred and liturgical dance since 1967 when he assisted in the creation of an experimental liturgy in a parish church in St. Paul, Minnesota. His early career as an educator was paralleled by the founding of his first dance company, the Black Orpheus Performing Artists, a group whose works were rooted in the sacred music of the African-American tradition. When that group disbanded, he joined forces with MGM film star and dancer Marge Champion with whom he enjoyed a seven year dance partnership as liturgical/sacred contemporary dancers. Other dance greats with whom John has been professionally involved include Carol Lawrence, Jeanette Collins, Rwanda Lewis, Carla DeSola, and Gloria Weyman.  John maintains his skills of choreography and dance technique through his role as artistic director of the Valyermo  Dancers. Under his direction, a long and broad company performance history includes a performance of Judith for the International Seminar on the Bible in Dance [Jerusalem, ‘79] for which they received recognition in Dance Magazine; there is also John’s participation as dance faculty in the Australian Bicentennial Conference on Sacred Dance [‘87] during which members of the Company danced Wings, a Native American interpretation of Genesis. The company repertory included three full length ballets, God’s Troubadour: An Original Jazz Ballet on the life of Francis of Assisi [‘77] that featured Carla DeSola; Dark Virgin: An Original Modern Ballet on the Virgin of Guadalupe [‘79]; and Lux Hodie: A Theatre Piece for Performing Artists in a Sacred Mode on the Life of St. Benedict [’80] His career has also included two involvements with the Mark Taper Form of Los Angeles [1973, Bernstein’s Mass and the 1977 production of Angel’s City]. The Company performed his original work, Colors of Love, in the Pre-Liturgy Celebration for Pope St. John Paul’s Mass at Dodger Stadium [‘87] commissioned by Radio City Music Hall Productions. In 2003, John served on the faculty of the Sacred Dance Guild Festival “Paths of Inspiration,” which was a continuation of his work and membership with Guild since the 70’s. A marketed video recording of The Passion of Our Lord According to John [World Library Publications ’98; Wordnet Productions reissue 2018] He and the company have also provided choreography and movement for the Los Angeles debut of composer Marty Haugen’s Agape [‘94] and his world debut of The Feast of Life: Stories from the Gospel of Luke [2000]. Concert work from 2013-2019 has been prominently focused on the annual performance of A Dancing Festival of Lessons and Carols, the music and choreographies for which underscore what John perceives as the multicultural and social justice foundations of the Advent and Christmas seasons. John’s most recent work has included “Sacred Space, Body and Movement,” a webinar Presentation for the Association of Consultants for Liturgical Space [ACLS], (May, 2019). Supplementing John’s choreographic and dance strengths has been the articles published over the last few years. Titles like “Pentecostal Winds and Flaming Splendor” [Sacred Dance Guild Special Edition Journal, 2017]; and four in Worship, Music & Ministry Journal : “Spiritually Alive Through Dance” [Summer 2018]; “Sacred Dance for Earth and Creator Spirit” [Summer 2019]; “A Dancing Festival of Lessons and Carols” [Winter 2019]; and “Sacred Dance Impels Social Justice and Action” [Summer 2020] provide a window into the scope and range of his creativity and thought as dancer, choreographer and liturgist. These also provide a window into John’s interfaith and ecumenical spirit. Mr. West’s experience with the Religious Education Congress of the Archdiocese of Los Angeles began in the early ‘70’s. Since 1991, he has served on the Congress Liturgy Committee. His work as Artistic Director of the Valyermo Dancers continues to be complemented by his roles as Sacred & Liturgical Dance Workshop Leader and Clinician and as Independent Educational Consultant on Equity and Social Justice. In 2013 he received the honor of “Man of Valor” from the NAACP. He lends his expertise to schools and organizational boards in Southern California. John has been on the Board of Directors of the Sacred Dance Guild since 2017