We are very excited to have Laura Shannon as our SECOND Interviewee in a series that will take place between June and August 2020.  This series will ask Sacred Dance Guild honorary members FIVE IMPORTANT QUESTIONS!  These questions were crafted by the Sacred Dance Guild Legacy Project Team who are working to create a Sacred Dance Guild Facilitator’s Accreditation Program.  We wanted to ensure that the deep thoughts of our honorary members are captured and included in the material that will be part of the Legacy Project to inform the present and the future.

What are the FIVE IMPORTANT QUESTIONS??  Register to find out!   Send an email to pres@sacreddanceguild.org with “LAURA SHANNON INTERVIEW” in the subject line and we will put you on the list.   Laura will be interviewed by SDG Co-Vice President Tricia mary Lee using ZOOM as the on-line system.  Registrants will be sent a link by email prior to the event and will have the opportunity to have questions or comments posed to Laura at the end of the talk. 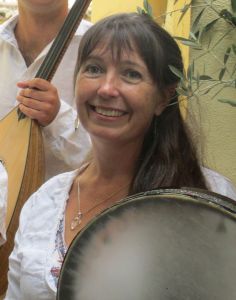 LAURA SHANNON is a dance ethnographer and dance movement therapist who has been researching and teaching traditional women’s ritual dances for more than thirty years. Her main focus is on Greek, Balkan, and Armenian women’s dances, and their inherently sacred, healing, and therapeutic qualities.   Laura is considered one of the ‘grandmothers’ of the worldwide Sacred/Circle Dance movement, and teaches in more than twenty countries worldwide. She holds degrees in Intercultural Studies and Dance Movement Therapy, and recently completed a Master’s degree in Myth, Cosmology, and the Sacred at Canterbury Christ Church University in England. Laura trained in Sacred Dance at the Findhorn ecological community in Scotland in 1987, and has been on the faculty of the Sacred Dance Department of the Findhorn Foundation since 1998. She also has a background in women’s Middle Eastern dance as a spiritual practice.

Laura’s passion for women’s folk dance traditions led her to visit many rural areas of Greece and the Balkans, to research women’s dances, songs, rituals and textile patterns which have been passed down for many generations. These ancient dance rituals most likely have their roots in the dawn of agriculture in the early Neolithic era, and they embody an age-old worldview based on values of sustainability, community, and reverence for the earth, the body and the female. Laura is Founding Director of the non-profit Athena Institute for Women’s Dance and Culture based in Germany, which supports ongoing research into these women’s dances. Since 2000 Laura has offered numerous two-year training programmes in Women’s Ritual Dances in Austria, Germany, Sweden, Canada and the USA. In 2018 Laura was chosen as an Honorary Lifetime Member of the Sacred Dance Guild in recognition of her ‘significant and lasting contribution to dance as a sacred art’.Laura’s articles and essays on women’s ritual dances have appeared in Dancing on the Earth: Women’s Stories of Healing Through Dance (Findhorn Press), She Rises! Vol. 2 and Celebrating Seasons of the Goddess (Mago Books), Re-Enchanting the Academy (Rubedo Press), Inanna’s Ascent and Revisioning Medusa (Girl God Press), Spiritual Herstories, the journals Dance, Movement and Spiritualities and Feminist Theology, and numerous other publications. Her work has also been mentioned in Iris Stewart’s book Sacred Woman, Sacred Dance. Laura edited the book String of Pearls: Forty Years of Sacred Dance in the Findhorn Community, and she writes a regular blog about women’s sacred dance on the website feminismandreligion.com. Laura is also a musician, and has produced or collaborated on numerous recordings of music for traditional dance. She frequently performs traditional music of Greece and Asia Miinor with her husband, Kostantis Kourmadias.
When not travelling for her research and teaching, Laura divides her time between Findhorn, Canterbury, and Greece.